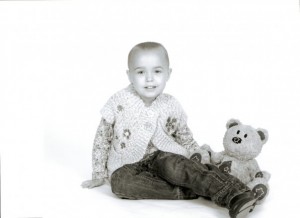 Ellie had always been a small unwell child from day one. Hospitals were telling me she would never survive past birth but Ellie was a fighter and survived!

At 4weeks old, Ellie contracted chicken pox. The doctors thought it was very unusual for a child so young. Ellie was always up and down losing weight gaining weight, not eating, sleeping all the time, picking up every illness you can think off and looking very pale.

I had a continuous fight with the doctor’s and health visitor who said it was normal childhood illnesses. Then, 14th March, 2008, a few days before starting a new life in Germany, Ellie saw a different doctor. We walked in and he didn’t even let us sit down and said Ellie was severely anaemic. He phoned the hospital immediately and we were sent there directly. He also told us to pack a bag for a few days. Ellie had a blood test and at 5.30 that evening we were taken to a room and told “There was a high possibility of Ellie having Leukaemia”. We were transferred the next day to Birmingham Children’s Hospital were on 17th march 2008, it was confirmed that Ellie had Acute Lymphoblastic Leukaemia.

2 years on Ellie is nearing end of treatment and is still fighting on strong.