Welcome to our member of the month
February 2013 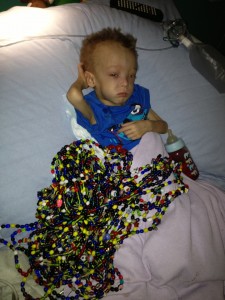 In April 2011 Charlie Harris – Beard, aged just 10 months, was diagnosed with Acute Myeloid Leukaemia and within just 4 months Charlie had already been through four intensive cycles of chemotherapy to cure the disease! Despite these grueling treatments, the rare type of leukaemia reappeared and Charlie desperately needed a bone marrow transplant – having being given just three months to live. Charlie had his transplant and was doing well, but sadly his family were told the cancer had come back again, and Charlie was to start treatment straight away. His family were devastated because this time the cancer was not responding to treatment, and Charlie’s parents were told there was nothing more that could be done. His mum and dad searched high and low for other treatment and trials for Charlie, and he has been accepted on a second trial but he is currently in HDU with pneumonia, so Charlie is a very poorly boy. As you can see from his photo, he has collected a lot of beads of courage for all the treatments he has had, and he always shows he is an amazingly courageous little boy. His beads mean a lot to him and his mum and dad because they help everybody to see just how far he has come, and what a beacon of strength their son is.
UPDATE: We were saddened to learn that Charlie lost his battle with cancer on Friday 8th February. We send our love and thoughts to his family at this time. Be at peace Charlie.